Published By: Spectrum of Wellness
Written By: Anna Laurab

Do you have a child with both food allergies and autism? If so, it can be doubly challenging and overwhelming at times. However, it is possible to manage both without going nuts. Here are some tips to help you accomplish this:

1. Take inventory of what kind of help and resources you need. I recommend hiring a health coach, or nutritionist to help you with the nutrition and meal planning part. You can of course hire me as a health coach. Check out what I offer on my coaching page. Otherwise I can provide you with referrals for a nutritionist or pretty much anyone or anything you might need. Click here to read the rest of the story.

Before Asthma and Allergy Awareness Month ends, I wanted to post links to free training modules on asthma and allergy. Below you will find a few that are all self-study which you can review on your own time. I included one for teachers and parents that focus on created a lesson plan for children which would be great for child with and without asthma and allergy issues.

Asthma and Nutrition Training Module– Developed by the University of Florida Pediatric Pulmonary Center, this course provides participants information on asthma and nutrition that may be used in assessing and counseling clients. This is a self-study module in a PowerPoint format with audio capture.

Asthma on Wheels Teacher Training Module– Created through the Mecklenburg County Health Department Asthma Education Program. This teacher training module provides a lesson plan to students with discussions of asthma and learning activities and list ways to educate students about asthma being a controllable condition in which students can live actively healthy lives. 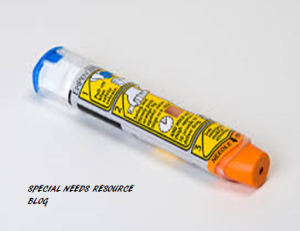 The EpiPen’s sudden price increase has received an onslaught of media coverage leading to a congressional hearing held yesterday. Currently, 43 million people are at risk for experiencing a life-threatening allergic reaction  concerning the spike in cost of the EpiPen over the years since 2004:

An EpiPen (short for Epinephrine) is often used in life-threatening emergencies to treat allergic reactions to insect stings such as bees, yellow jackets and hornets. When a person is stung by an insect, the normal reaction includes swelling and redness around the site. There are those however that experience an allergic reaction, also know as an anaphylactic reaction. Other serious allergic reactions may include foods such as eggs, milk, peanuts, shellfish and wheat. The symptoms of a severe allergic reaction include: trouble breathing, a rash, difficulty swallowing. dizziness, heart palpitations and  chest discomfort.

EpiPens are pre-filled and delivers medication into the muscle of the outer thigh. The injection reduces swelling of the throat and face, stimulates the heart and raises the blood pressure. Anyone that uses the auto injector, should still be checked out by a health care specialist.